His gem
Amaru is an Ephedian creature with the ability to change into a Pegasus. Sometimes, he rolls like a hedgehog to dodge magic spells. Amaru can also control magic.

Cute Amaru is a small, furry dog-like cat creature with purple and white fur with dark blue hair, green eyes, a green and gold gem jewellery in his neck level, and a little fuzzy tail. He uses his green gem to transform into his pegasus form, which resembles a purple and white furry horse with a blue mane, a small nose, a blue tail put in a ponytail on his rear and clearish periwinkle wings.

The little cute creature is a reliable friend, and often joyful. He helps the princesses when they are in trouble. However, Amaru is also known to be a glutton, as he also loves to eat.

Amaru was first shown in "To Find a Princess" and last shown in "Crowning Glory: Part 2". 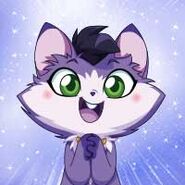 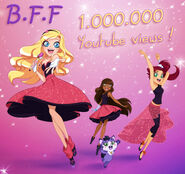 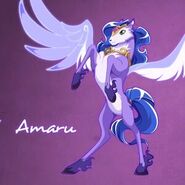