Ellira, better known as Aunt Ellen, is a supporting character who appears in LoliRock. She is an Ephedian Royal Guard who was tasked by the Queen to raise Iris and protect her from Gramorr. She kept this a secret from Iris as per orders from the Queen, until Iris found out her secret in the episode "Truth Be Told," and eventually revealed it to Talia and Auriana that she is an Ephedian as well in the episode "Crowning Glory: Part 1."

Aunt Ellen has short, curly, dark orange hair and olive green eyes. She often wears a reddish purple jacket with a bright green top beneath and a pair of rolled-up jeans.

Ellira has red hair, sometimes wearing a dark purple mask and wears a purple guard uniform. and a green hat. Also she has a black watch. She wears a necklace with red, orange and purple beads.

In Truth To Be Told, Iris discovered that Ellen is an Ephedian, which was sent to Earth with her for Iris’ safety.

Ellen is a kind, loving and friendly aunt who loves Iris very much, like she was her own niece.

As Ellira, she took an oath to the Queen of Ephedia to care, love and to show kindness to everything around her lucky star.

Ellira saving Iris from the twins 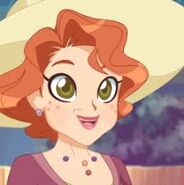 Both forms.In her transformation on the left and regular on the right.
Add a photo to this gallery
Retrieved from "https://lolirock.fandom.com/wiki/Aunt_Ellen?oldid=30939"
Community content is available under CC-BY-SA unless otherwise noted.