Separated from her family

Ring
Princess Auriana of Volta is a main character of LoliRock. She is the Princess of Volta and one of the members of the LoliRock band. She befriended Iris once she and Talia chose her as the lead singer of the band.

Auriana has auburn hair tied in a side ponytail with a periwinkle bow, green eyes, and pale skin. She usually wears an orange shirt that drapes off one shoulder with what could be a white camisole underneath. A white skirt with a dark purple belt, and blue shoes. She wears a long beaded necklace, a baby blue heart shaped earring, and periwinkle and green bracelets.

After she transforms, she has orange-yellow hair. Her magic gem symbol is an orange crescent moon. Her crystal is located in her ring which is star-shaped. She wears an orange and white dress with orange boots.

Auriana is the most optimistic of the group. She can get distracted easily but when her friends, Iris and Talia, are in trouble they really can count on her for help. She is optimistic, bubbly, and her happiness is always shining brightly. She is also very chatty and can say out of line things but is a caring friend and is always there when they need her.

Although portrayed as a klutz, Auriana is a capable fighter being able to be on the same combative level as Talia. Though not an expert at most spells like the Xeris princess, Auriana is very proficient in defensive spells, a trait that Voltans are known for. Auriana surprisingly has good communication with earth animals as shown in the episode "Sirens".

Auriana fights with the Ribbon of Volta often using it as a whip to attack and restrain her enemies. She is also shown to have thrown a crescent-shaped boomerang once which is not named nor seen as an altercation of her Ribbon of Volta.

In season 1, Auriana is first introduced when trying to find Iris. She was first seen in the episode To Find a Princess when they were doing auditions. More Coming soon...

Like her fellow princesses, Auriana can use Crystal Magic. Though not as proficient as Talia, she has a good grasp of it to be a good rival in combat, especially on defensive shield. Additionally, she can call upon the Ribbon of Volta as a weapon during a fight. 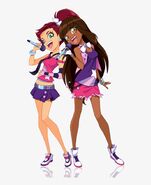 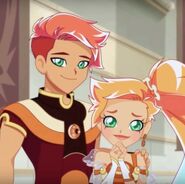 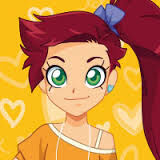 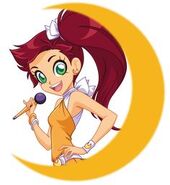 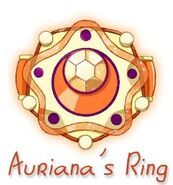 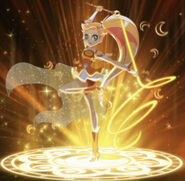 Retrieved from "https://lolirock.fandom.com/wiki/Auriana?oldid=34052"
Community content is available under CC-BY-SA unless otherwise noted.