Banes/Gallery
Banes is a mysterious black panther companion of Gramorr. He looks like a large feline creature but his furs were dark and he walks with flames on his feet. Gramorr loves to talk to him even though he's just a pet. Gramorr also has a habit of apologizing to Banes whenever things go wrong or got delayed. Banes also seems to be, connected in some way to Gramorr or the other way around.

Wherever Gramorr goes, he is followed by Banes, an evil black Panther... As for his master, Banes is a force to be reckoned with.

Gramorr and Banes are the supreme evil in LoliRock’s universe.

Banes is a creature that exudes dominance. He likes to follow Gramorr almost all the time. He is also intelligent that he can follow orders or rise to the occasion. He seems very observant of his surroundings. He can also act impatient when things don't go as they planned. Though he never speaks like a human, Gramorr talks to him most of the time like he is a trusted adviser or a genuine partner.

Banes looks like a black panther that is very largely built. His fur appears to be shadows with flames like edges.

Aside from being physically overwhelming, Banes has also shown the ability to teleport and turns his body into a cloud when he's disappearing and when he's about to reveal himself.

Banes was shown to be a master of Black Crystal magic capable of generating crystal wherever his claws strike. He can fire energy blast through his mouth. Banes is capable of glamour as he can transform into other forms to deceive his enemies.

Lastly, Banes is shown to be highly resistant to Crystal Magic as he can withstand powerful Convergence Spells such as Crystal Quinta.

Bogan is the Earth cat form of Banes used to steal Iris, Talia and Auriana's powers via their activation objects and obtain the Oracle Gems. His first and only appearance was in "Super Cute Kitten".

He was first seen in the said episode when the Rocks heard a sound coming from the park. When they ran towards the lake where the sound was located, there was a kitten drowning and Iris tried to save it with Crystal Cranea. The three girls then aim to adopt the kitten, but Aunt Ellen doesn't trust them since she was hosting enough teenage girls and there was no room for a stray cat. Iris then told Ellen that the cat may be hurt, and Ellen later accepted it.

While Bogan was staying at home, Amaru quickly became jealous of the kitty due to all the attention it gets and decides to try to throw it off a lake with a trashcan. He then gets stopped by the Twins (Mephisto and Praxina), one of the two who hypnotized him with Amatere Notizia, erasing his entire memories and have the mentality to that of a dog.

While the girls were cuddling Bogan, he suddenly tried to steal one of the girls' powers and unexpectedly transformed to his true form: Banes. The drama ends with Banes himself being defeated by the powerful Crystal Quinta, forcing him to return back to Ephedia and reunite with Gramorr. 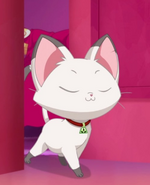