Black Crystal Magic
Deinos and Kakos are Gramorr's (short-lived) evil twin replacements of Mephisto and Praxina. They only appear in the episode, "Raffle Baffle", pursuing the girls. Deinos' signature color is gray-blue while Kakos's is yellow. The two are much more fearsome than Praxina and Mephisto because they are more coordinated. Deinos begins every spell and Kakos finishes them.

Since they are identical twins, both brothers sport a brush-up hair and tan skin. Deinos' costume is black with blue highlights while Kakos has yellow.

Both brothers were proud of their skills and were not shy to brag about. They can be ruthless and shows less emotion than Praxina and Mephisto. They are so in sync that they even finish each other's sentences.

In episode 20, a girl who was selling raffle ticket to buy her band new costumes said that a twin in weird clothing stole her ticket. Iris and the other instantaneously thought it was Praxina and Mephisto. They confronted the two in a valley but what they've witnessed was an argument between the evil twins who seems to be upset over something. They left nonchalant to the fact that the princesses were already in front of them. LoliRock found it strange but then they were assaulted by Black Crystal Magic. Iris thought they were tricked by Mephisto and Praxina making her call them the two sneaky twins. Deinos and Kakos then revealed themselves. They countered each attacks coming from the princesses. The girls were no match to the incredible coordination of the two. Mephisto, who was observing the battle commented they were so good in teamwork that they even finish each other's sentences.

About to cast a spell 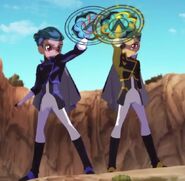 inside a communication crystal

Kakos' Magic Circle
Add a photo to this gallery

Retrieved from "https://lolirock.fandom.com/wiki/Deinos_and_Kakos?oldid=34110"
Community content is available under CC-BY-SA unless otherwise noted.