Ephedia is a fictional planet in the LoliRock series. Iris is the only known princess in the queendom.

Ephedia is the magical planet where the magical characters in the story lived/originated as well as the name of the ruling realm. It has different features from Earth, such as floating crystal landscapes and crystals embedded in rocks, plants, and even in their water forms. The planet is divided into several kingdoms but is ruled by a capital named also Ephedia. The royal family of Ephedia rules over the other kingdoms or vassal realms. So far only 4 realms were named;

Each realm has their own ruling family. The land is also the home of crystal summoners or magic users. The royalties are known as crystal summoners, using different spells that manipulate crystal formation and other fantastic feats that don't necessarily involve creating crystal. However, there are also black magic users known as Black Crystal Summoners. The greatest Black Crystal Summoner is Gramorr, who has mastered high-level magic that made him a force to reckon with. Almost all the realms of Ephedia were defeated by Gramorr and imprisoned in the castle of Ephedia through the machinations of the Queen, utilizing the Crown of Ephedia and sending it's Oracle gems to earth.

During the rule, Ephedia's castle was corrupted by his Black Crystal Magic. The part that is still untainted by his power is the crystal at the top of the palace, and it gives enormous power to the princesses whenever they cast "Crystal Luxtra". Though he is imprisoned, the influence of his magic is not cancelled. His Black Crystal Monsters roam all over Ephedia, and can freely go out on missions for Gramorr. Black Crystal Summoners were also dispatched to do his bidding, making him a force to be reckoned with.

Ephedia is ruled by "The Queen" and is matriarchal in nature. The Queen rules with absolute power and magic making sure that justice is upheld in all the realms. The King's role is to protect the Queen and the realms of Ephedia. Daughters of royalties are trained to be Magical Princesses.

The only known cultural festivity of Ephedia is the Crystalline Light Festival, which Talia had attended when she was young.

Ephedian fashion consists of creative middle-age like clothing with various colors, depending on your realm. It also has a bit of modern fashion, like cardigans, modern dresses and belts.

As the seat of power in all of Ephedia, the capital's castle is an important place. There we can find the throne room where the Queen used to occupy along with her guardian King. Currently, the crown is sealed in the throne room to protect it from Gramorr. Another important part of the castle is the tower with the crystal that powers the princesses' attack Crystal Luxtra. It is said that it is the only part of the castle that has not yet succumbed to the dark wizard's evil influence. Lastly, there is the prison called Krozak in which Gramorr imprisons the Xerin princess Izira.

Hallway in the castle of Ephedia 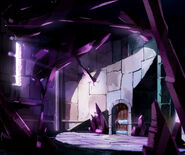 Inside the prison tower of Ephedia

The Crown was sealed

Gramorr took over whilst being imprisoned.....

The bottom of Krozak prison, where Izira was held captive.

Outside view of Krozak.
Add a photo to this gallery
Retrieved from "https://lolirock.fandom.com/wiki/Ephedia?oldid=33506"
Community content is available under CC-BY-SA unless otherwise noted.