Princess of Xeris, Leader of the Resistance

Her Medallion
Princess Izira is a recurring character in LoliRock and is Talia's older sister.

She has similar characteristics to Talia, but is different in overall appearance. Izira has white hair and moderate mulberry eyes. She wears a blue and cyan dress and a medallion which she uses to tie her hair up.

She is responsible and has a lot of integrity. She is a natural leader and is very concerned about the safety of her people.

Izira is the first born princess of Xeris and Talia's older sister. Izira was known to be extremely powerful and everyone had believed that she would have the power to defeat Gramorr. Several years earlier, Talia wanted to attend the Crystal Lights Festival and had tried to sneak away. However, Izira spotted her and warned her sister that it was dangerous for her to leave, reminding her that the remaining realms of Ephedia would join together to defeat Gramorr. She also told Talia she couldn't pretend that everything was alright, that she needed to train harder and said that everyone is counting on them.

However, Talia didn't believe that everyone needed her, but believed that everyone was really counting on Izira to defeat Gramorr and pointed out that she is powerful, smart and a leader. Izira however asked Talia what if she wasn't around to protect everyone, but Talia didn't believe that would happen seeing as Izira was always there if she ever messed up or if she wanted to sneak off without her noticing or catching her in the act. Izira then decided to let Talia attend the festival and made her promise to train harder from now on, she also allowed Talia to look after her Medallion and she left. However soon after Talia was gone, Gramorr attacked and with her powers greatly weakened without her medallion, Izira couldn't defeat him and was taken prisoner.

Talia had soon returned from the festival and found her home completely destroyed. She called out to her parents and Izira, but soon found Gramorr and overheard him saying how easy it was to defeat her family and sister. Talia hid herself from him and was left devastated by the loss of her family. On that day, Talia vowed to change her ways and became disciplined and focused on finding Iris and defeating Gramorr, while also looking after Izira's Medallion in hopes to one day find her and her parents.

In Xeris, Talia had used Izira's Medallion to stop Praxina and Mephisto when they were about to capture her along with Iris and Auriana. Everyone had witness the immense power from the medallion and were greatly impressed, Iris asked about the Medallion's origins, but Talia avoided the subject and they went back home. However, unknown to Talia she had accidentally dropped the Medallion and Praxina and Mephisto had shortly arrived and found it. Back at Iris's house, shortly after practicing for an upcoming concert, Iris and Auriana had again asked Talia about the Medallion and the spell she used as they have never seen anything like it. Talia again tried to brush off the subject, stating it's something she has been fooling around with. However, Iris was still curious about the magic that came from it while Auriana believed it to be a gift from a boyfriend she had been keeping a secret.

When asked why she never mentioned it before, Talia stated she was going to tell them at some point but wasn't sure if she was able to control it and mentioned that she shouldn't even have it. They begin to ask more questions until finally Talia lost her temper and revealed that it wasn't hers. Upset and on the verge of tears, Talia had decided to tell them the truth and was about to show them the Medallion until she realized that it was gone. Iris deduces that it must have fallen after she cast the spell, making Talia realize it must still be on the mountain. Meanwhile, Praxina and Mephisto had gone back to their hideout with the medallion and told Gramorr that the plan failed and showed him the medallion Talia had used. Recognizing it as Izira's Medallion, Gramorr demanded that they destroy it at once.

After battling the twins and witnessing them destroying the medallion, Talia had lost her hopes of saving her sister and seeing her again. The girls convince her to look for a fragment of it in the mountains. They managed to find the diamond jewel that was detached from it. With a spell, Talia was able to see her sister and discovered she was being held captive in the prison of Ephedia. Talia promised her she would someday save her.

In the first part of the finale, two hooded figures saved Talia and Auriana from Gramorr's monsters. The rescuers were revealed to be Lyna and Carissa who were just following someone's orders. then another hooded figure revealed herself as the leader of the resistance and Talia's sister: Izira.

In the second part, she explained to the girls that she was rescued by Lyna and Carissa. They then formed the resistance against Gramorr, with Izira as the leader. She trained Lyna and Carissa to use the least amount of energy to defeat the enemies. Then she helped the girls rescue Iris from the castle by asking Lyna to use her flight spell. Then she battled Gramorr along with Lyna and Carissa as the girls try to rescue Iris. Gramorr told her he was waiting for her. She reply "Not as much as I do." then she cast her powerful spell but was shocked that the enemy easily dissolved her spell. When Iris was freed and transformed, with the crown of Ephedia, the girls gained the upper hand. However Gramorr managed to fend them off by showing them Earth was under attack by his monster. The girls retreated to save Earth. Izira did not join them because she needed to lead the resistance. Instead she ordered Lyna and Carissa to go with the girls and listen to everything Talia says. The sister parts with tears but promised to see each other again when Gramorr is gone.

Izira has returned to main encampment at Xerix, where she keeps actively striving all Ephedians together. She also keep in contact with Princess on planet Earth in order to warn them as soon as possible when the crown is completed. 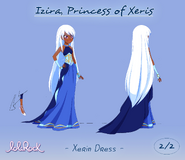 Retrieved from "https://lolirock.fandom.com/wiki/Izira?oldid=30268"
Community content is available under CC-BY-SA unless otherwise noted.