Sword
The King of Ephedia is Iris's father. The Queen ruled Ephedia with him by her side until Gramorr betrayed him and his wife.

The king of Ephedia is a matured looking man with broad body and sports dark violet hair. He wears a golden crown, shoulder pads, cape, boots and suit with a red star jewel on his cape.

The Queen and her husband were the rulers of Ephedia until they were betrayed by Gramorr who attacked them and took the throne. To protect her daughter, the queen sent her to Earth. After that, Gramorr tried to take the power of her crown, but he failed as it has a magical protection. The oracle gems disappeared and dispersed on Earth. It is unknown as to what happened to the Queen and King.

The king is shown to be able to conjure a sword out of thin air.

King of Ephedia: model sheet - without cape (back part)

Iris' vision in The Birthday

The King and The Queen in imprisonment, as shown by Gramorr 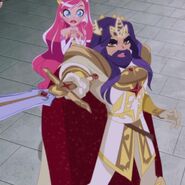 Retrieved from "https://lolirock.fandom.com/wiki/King_of_Ephedia?oldid=34092"
Community content is available under CC-BY-SA unless otherwise noted.