Praxina insulting him and scolding him

Gramorr scolding him and his sister

Losing to the princesses

Made a fool of

Izira's Medallion (briefly)
Mephisto was the twin brother of Praxina, and one of the main evil villain in LoliRock. He was more bumbling and incompetent than his sister Praxina.

In the Season 2 finale, he was hit by a powerful explosion whilst saving his sister and hasn't been seen since that.

He is voiced in Hebrew by Saar Badishi.

Mephisto stands at a medium-height. He has burgundy hair with a fringe, mirroring his sister Praxina's. He has green eyes and thick eyebrows. He has a hairclip in the shape of a snake and wears a white shirt with black pants, boots, and a cape. He also wears black gloves.

Mephisto was a comic relief and joker, which is not your typical villain. He sometimes acts cheesy, incompetent, bumbling and has a short attention span, but can be capable of being intelligent despite his dimwittedness. Mephisto enjoys destroying things, and prefers elaborate spells and tricks and bragging about how he's a genius. He is also less coordinated and has a mischievous and childish personality that can easily distract him from his and Praxina's missions at times. He is always loyal to his sister and would do everything for keeping her with him. He also is caring.

His magic gem is green. 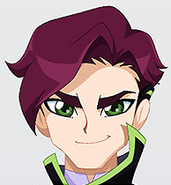 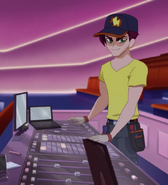 Mephisto disguised as a technician in No Thanks For The Memories.

Mephisto joining LoliRock
Add a photo to this gallery

Retrieved from "https://lolirock.fandom.com/wiki/Mephisto?oldid=33898"
Community content is available under CC-BY-SA unless otherwise noted.