Praxina is the twin sister of Mephisto, together working for their former master, Gramorr. Doing the latter's bidding, they did the dirty work for Gramorr by facing the princesses.

Praxina has mid-long hair the color between burgundy and purple. She has a fringe, hiding one eye and a hairclip on the other side in the shape of a butterfly. She has dark blue eyes and wears a black dress with red and white sings on the middle and top, gloves without fingers, a cape and black high heels. Her nails are black.

In the episode, Forget You! Praxina loses her memory in a fight with Iris, Talia, and Auriana by her own spell. The trio dresses her in a white t-shirt with a black butterfly design and a bow on her left shoulder, ripped jean shorts, magenta tights and black heels. Her hair is tied in a loose ponytail over her shoulder with a gold hairband. She has an orange and purple checkered bracelet on her left hand and a big pink bracelet between 2 smaller gold ones on her right.

At the end of Season 2, Praxina has skin the same as Banes' that covers her body, shoulder pads the same as Gramorr's, a black and purple cape and half of his mask over where her hair covers her face.

Praxina is a very affirmed person determined to obtain the Oracle Gems, and to destroy the five Ephedian Princesses. She loves to belittle people, especially her enemies and her twin brother, Mephisto, the latter of whom she reminds that she was born before. She is extremely cold, ruthless, and hates the Princesses at heart and wishes to destroy all of them. Her attacks tend to be demonstrations of raw power with explosions and large summoned monsters. She also is very bossy and has a soft side for Mephisto. She also seems to be an animal lover and enjoys baby talking her creations.

Praxina's power is black and red crystal energy, often used in form of crystals. She use different kinds of spells, such as "Ateruina", "Teranor". She is also able to create monsters from her crystals. Just like Mephisto, she can fly and teleport. When in an offense based battle she can easily shoot massive waves of crystals, on the other side her defensive abilities aren't that evolved. Praxina is a skilled fencer and wields skillfully with both hands. In season 2 episode 18, she demonstrates to be a gifted dancer full of grace and agility. 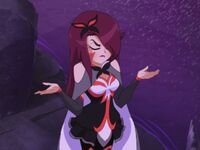 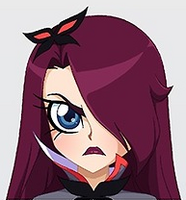 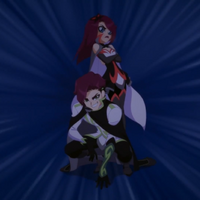 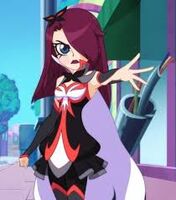 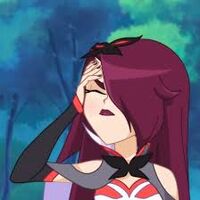 Praxina without Cape (End Of Season 2) 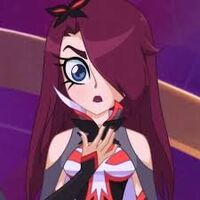 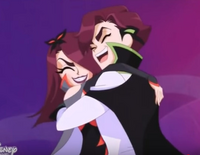