Her daughter and her husband

The Queen of Ephedia is the mother of Iris. She ruled Ephedia before Gramorr attacked and usurped the throne.

The queen is a slender woman with long light purple wavy hair, fair skin and light blue eyes. She wears a white long sleeved off the shoulder dress with a pink heart on the chest with a blue gem in the center of it and a sliver crown containing the Oracle Gems.

She is shown to be a caring, loving mother to Iris, as at the end of Season 2, it is revealed that she had to send Iris with Aunt Ellen to Earth. She was sad to see Iris go, and cares very much about Ephedia. She also dislikes Gramorr.

The Queen and her husband were the rulers of Ephedia until they were betrayed by Gramorr who attacked them and took the throne. To protect her daughter, the queen sent her to Earth. After that, Gramorr tried to take the power of her crown, but he failed as it has a magical protection. The oracle gems disappeared and dispersed on Earth. It is unknown as to what happened to the Queen and King.

The Queens of Ephedia are the legitimate rulers and holder of absolute power. 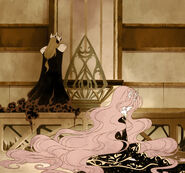 Iris' vision in The Birthday

The King and The Queen in imprisonment, as shown by Gramorr

The Queen in the untrue message

The Queen in her message to Iris

The Queen and Iris in Truth Be Told

The Queen gives Iris to Ellira

The reunion
Add a photo to this gallery

Retrieved from "https://lolirock.fandom.com/wiki/Queen_of_Ephedia?oldid=30940"
Community content is available under CC-BY-SA unless otherwise noted.