Guitarist
Zack Brady is a minor character from Lolirock. He made his debut in the seventeenth episode, Heavy Metal. Iris bumps into him at the beginning of the episode. Zack's most prized possession is an electric guitar, which is painted red on front and white on the back.

Zack has wavy hazel hair, pale-blue eyes and light tanned skin. Zack seems to have a particular fondness for jackets, as he is seen wearing different colored ones throughout the episode. He also wears a sleeveless shirt under his jacket. During important events, like the "Teen Talents Showcase", he is shown wearing a fashionable creamy-white scarf with a silver colored accessory around his neck. The accessory is probably a good luck charm. He likes wearing black jeans. He also carries his electric guitar in a black guitar case, which is strapped to his back.

Zack is shown to be self-conscious, especially when it comes to his guitar playing. He values his parents' opinions above his own and because of that, he lacks confidence in his abilities. Despite his reluctance, Zack is a talented guitarist, who managed to impress both the audience and his parents. 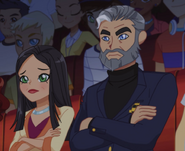 Retrieved from "https://lolirock.fandom.com/wiki/Zach_Brady?oldid=32265"
Community content is available under CC-BY-SA unless otherwise noted.